The Sleepwalkers: How Europe Went to War in 1914 (Hardcover) 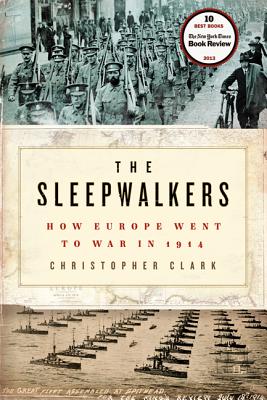 By Christopher Clark
Email or call for price

The Sleepwalkers: How Europe Went to War in 1914 is historian Christopher Clark’s riveting account of the explosive beginnings of World War I.

Drawing on new scholarship, Clark offers a fresh look at World War I, focusing not on the battles and atrocities of the war itself, but on the complex events and relationships that led a group of well-meaning leaders into brutal conflict.

Clark traces the paths to war in a minute-by-minute, action-packed narrative that cuts between the key decision centers in Vienna, Berlin, St. Petersburg, Paris, London, and Belgrade, and examines the decades of history that informed the events of 1914 and details the mutual misunderstandings and unintended signals that drove the crisis forward in a few short weeks.

Meticulously researched and masterfully written, Christopher Clark’s The Sleepwalkers is a dramatic and authoritative chronicle of Europe’s descent into a war that tore the world apart.

Christopher Clark is a professor of modern European history and a fellow of St. Catharine's College at the University of Cambridge, UK. He is the author of Iron Kingdom: The Rise and Downfall of Prussia, 1600-1947, among other books.

“An important book. . . . One of the most impressive and stimulating studies of the period ever published.” — Max Hastings, The Sunday Times

“Excellent. . . . The book is stylishly written as well as superb scholarship. No analysis of the origins of the First World War will henceforth be able to bypass this magisterial work.” — Ian Kershaw, BBC History

“The most readable account of the origins of the First World War since Barbara Tuchman’s The Guns of August. The difference is that The Sleepwalkers is a lovingly researched work of the highest scholarship.” — Niall Ferguson

“This compelling examination of the causes of World War I deserves to become the new standard one-volume account of that contentious subject.” — Foreign Affairs

“Clark is a masterly historian. . . . His account vividly reconstructs key decision points while deftly sketching the context driving them. . . . A magisterial work.” — The Wall Street Journal

“A monumental new volume. . . . Revelatory, even revolutionary. . . . Clark has done a masterful job explaining the inexplicable.” — The Boston Globe

“Easily the best book ever written on the subject. . . . A work of rare beauty that combines meticulous research with sensitive analysis and elegant prose. The enormous weight of its quality inspires amazement and awe. . . . Academics should take note: Good history can still be a good story.” — The Washington Post

“Superb. . . . One of the great mysteries of history is how Europe’s great powers could have stumbled into World War I. . . . This is the single best book I have read on this important topic.” — Fareed Zakaria

“A thoroughly comprehensive and highly readable account. . . . The brilliance of Clark’s far-reaching history is that we are able to discern how the past was genuinely prologue. . . . In conception, steely scholarship and piercing insights, his book is a masterpiece.” — Harold Evans, The New York Times Book Review

“As spacious and convincing a treatment as has yet appeared. . . . Clark’s prose is clear and laced with color.” — The Daily Beast

“A great book. . . An amazing narrative history of the crisis and the larger context.” — Slate

“A superb account of the causes of the first world war. . . . Clark brilliantly puts this illogical conflict into context.” — The Guardian

“This book is as authoritative as it is gripping. . . . Clark provides a vivid panorama of the jostling among Europe’s policymakers. . . . The reader is rapt as ‘watchful but unseeing’ protagonists head for inconceivable horror.” — The Independent

“Excellent. . . . Where Clark excels is in explaining how the pre-war diplomatic maneuvers resembled a giant exercise in game theory.”- — The Economist

“Clark’s narrative sophistication, his philosophical awareness, and his almost preternatural command of his sources make The Sleepwalkers an exemplary instance of how to navigate this tricky terrain. The best book on the origins of the First World War that I know.” — Thomas Laqueur, The London Review of Books

“One of 2013’s finest nonfiction books. . . . Offers more up-to-date scholarship than you’ll find in a classic like Barbara Tuchman’s The Guns of August.” — Matthew Yglesias, Slate