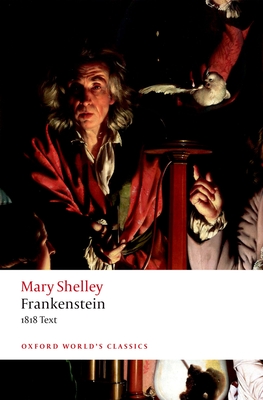 By the dim and yellow light of the moon, as it forced its way through the window-shutters, I beheld the wretch-the miserable monster whom I had created. He held up the curtain of the bed; and his eyes, if eyes they may be called, were fixed on me. His jaws opened... Frankenstein is the most celebrated horror story ever written. It tells the dreadful tale of Victor Frankenstein, a visionary young student of natural philosophy, who discovers the secret of life. In the grip of his obsession he constructs a being from dead body parts, and animates this creature. The results, for Victor and for his family, are catastrophic. Written when Mary Shelley was just eighteen, Frankenstein was inspired by the ghost stories and vogue for Gothic literature that fascinated the Romantic writers of her time. She transformed these supernatural elements an epic parable that warned against the threats to humanity posed by accelerating technological progress.
Published for the 200th anniversary, this edition, based on the original 1818 text, explains in detail the turbulent intellectual context in which Shelley was writing, and also investigates how her novel has since become a byword for controversial practices in science and medicine, from manipulating ecosystems to vivisection and genetic modification. As an iconic study of power, creativity, and, ultimately, what it is to be human, Frankenstein continues to shape our thinking in profound ways to this day.

Mary Wollstonecraft Shelley Nick Groom is Professor in English at the University of Exeter. He has published widely for both academic and popular readerships, and among his many books are The Forger's Shadow (Picador 2002), The Union Jack (Atlantic 2006, rev. edn 2017), The Gothic: A Very Short Introduction (OUP 2012), The Seasons: A Celebration of the English Year (Atlantic 2014), and editions of a variety of eighteenth-century texts, from crime writing to Shakespeare. He has edited Horace Walpole's The Castle of Otranto (2014), Matthew Lewis's The Monk (2016), and Ann Radcliffe's The Italian (2017) for Oxford World's Classics.