The Framers' Coup: The Making of the United States Constitution (Hardcover) 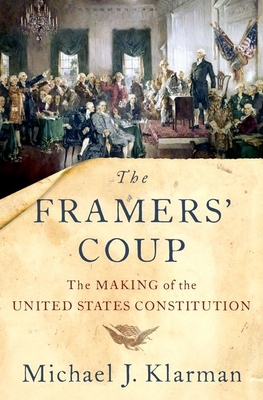 Americans revere their Constitution. However, most of us are unaware how tumultuous and improbable the drafting and ratification processes were. As Benjamin Franklin keenly observed, any assembly of men bring with them "all their prejudices, their passions, their errors of opinion, their local interests, and their selfish views." One need not deny that the Framers had good intentions in order to believe that they also had interests. Based on prodigious research and told largely through the voices of the participants, Michael Klarman's The Framers' Coup narrates how the Framers' clashing interests shaped the Constitution--and American history itself. The Philadelphia convention could easily have been a failure, and the risk of collapse was always present. Had the convention dissolved, any number of adverse outcomes could have resulted, including civil war or a reversion to monarchy. Not only does Klarman capture the knife's-edge atmosphere of the convention, he populates his narrative with riveting and colorful stories: the rebellion of debtor farmers in Massachusetts; George Washington's uncertainty about whether to attend; Gunning Bedford's threat to turn to a European prince if the small states were denied equal representation in the Senate; slave staters' threats to take their marbles and go home if denied representation for their slaves; Hamilton's quasi-monarchist speech to the convention; and Patrick Henry's herculean efforts to defeat the Constitution in Virginia through demagoguery and conspiracy theories. The Framers' Coup is more than a compendium of great stories, however, and the powerful arguments that feature throughout will reshape our understanding of the nation's founding. Simply put, the Constitutional Convention almost didn't happen, and once it happened, it almost failed. Even after the convention succeeded, the Constitution it produced almost failed to be ratified. Just as importantly, the Constitution was hardly the product of philosophical reflections by brilliant, disinterested statesmen, but rather ordinary interest group politics. Multiple conflicting interests had a say, from creditors and debtors to city dwellers and backwoodsmen. The upper class overwhelmingly supported the Constitution; many working class colonists were more dubious. Slave states and nonslave states had different perspectives on how well the Constitution served their interests. Ultimately, both the Constitution's content and its ratification process raise troubling questions about democratic legitimacy. The Federalists were eager to avoid full-fledged democratic deliberation over the Constitution, and the document that was ratified was stacked in favor of their preferences. In terms of substance, the Constitution was a significant departure from the more democratic state constitutions of the 1770s. Definitive and authoritative, The Framers' Coup explains why the Framers preferred such a constitution and how they managed to persuade the country to adopt it. We have lived with the consequences, both positive and negative, ever since.

Michael J. Klarman is Kirkland & Ellis Professor of Law at Harvard Law School and author of the Bancroft Prize-winning From Jim Crow to Civil Rights (OUP).