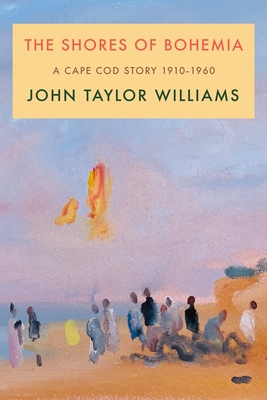 An intimate portrait of a legendary generation of artists, writers, activists, and dreamers who created a utopia on the shores of Cape Cod during the first half of the twentieth century.

Their names are iconic: Eugene O’Neill, Willem de Kooning, Josef and Anni Albers, Emma Goldman, Mary McCarthy, Edward Hopper, Walter Gropius—the list goes on and on. Scorning the devastation that industrialization had wrought on the nation’s workforce and culture in the early decades of the twentieth century, they gathered in the streets of Greenwich Village and on the beach - fronts of Cape Cod. They began as progressives but soon turned to socialism, then communism. They founded theaters, periodicals, and art schools. They formed editorial boards that met in beach shacks and performed radical new plays in a shanty on the docks, where they could see the ocean through cracks in the floor. They welcomed the tremendous wave of talent fleeing Europe in the 1930s. At the end of their era, in the 1960s, as the postwar economy boomed, they took shelter in liberalism when the anticapitalist movement fragmented into other causes.

John Taylor “Ike” Williams, who married into the Cape’s artistic world and has spent half a century talking about and walking along its shores with these cultural and political luminaries, renders the twisting lives and careers of a generation of staggering American thinkers and creators. The Shores of Bohemia records a great set of shifts in American culture and the ideas and arguments fueled by drink, infidelity, and competition that made for a fifty-year conversation among intellectual leaders and creative revolutionaries. Together they found a community as they created some of the great works of the American Century. This is their story. Welcome to the party!

John Taylor "Ike" Williams is a founder of the literary agency Kneerim & Williams and a lawyer specializing in intellectual property and First Amendment litigation. He is the coauthor of the widely used textbook Perle, Williams & Fischer on Publishing Law. Williams has served as chair of the National Endowment for the Arts awards panel and as a trustee of the Institute of Contemporary Art in Boston and of the Fine Arts Work Center in Provincetown, Massachusetts, among other positions. He lives in Cambridge and Wellfleet, Massachusetts.

“[A] chronique scandaleuse of bad or baddish behavior on the Cape during the first half of the 20th century.” —Christopher Irmscher, The Wall Street Journal

"[The Shores of Bohemia] is invaluable . . . 'Where we live the land is untamed, with sandy roads that for the most part do not lead anywhere,' is how Francis Biddle, the U.S. attorney general and Nuremberg judge, described the pull [of Cape Cod]. But of course, in the world of art, writing, drama and architecture, these pioneers and bohemians did lead somewhere — to a future they tried to conjure up in the refuge from the present that they found." —Andrew Sullivan, The New York Times Book Review

"[T]he milieu on the Cape—the famous and their forgotten companions alike—built a world of perpetual creative ferment, a hub from which great trends in art, philosophy, and politics spread to the rest of the country. Williams gives an expansive and alluring account of the Cape’s heyday. You’ll wish you could have been there." —Tayla Zax, The Atlantic

"The Shores of Bohemia, not only explores the unreliable boundaries between the local and the global, it marks, as well, the various intersections of historical event, human mysteries, and pure magic." —Michael Cunningham, author of The Snow Queen

"This wonderful book utterly beguiled me. On the surface, it is about a small portion of Cape Cod, the three final towns: Wellfleet, Truro and Provincetown. Yet it is about much more than that, and tells a beautiful story about friendship and creativity at the height of the American Century." —Ted Widmer, author of Lincoln on the Verge: Thirteen Days to Washington

"[A] longtime Cape Cod resident, Williams draws on personal interviews, memoirs, biographies, and cultural histories to create a generous, commodious portrait of the communities of artists and writers who flourished on the Cape from 1910 to 1960 . . . An intimate view of creative lives in turbulent times." —Kirkus Reviews

"Surely no place has had so many brilliant American painters, playwrights, novelists, architects, and intellectuals as the three towns at the end of Cape Cod did from 1910 to 1960. Ike Williams has found them all and given us an astonishing portrait of their lives together. Who could put this book down?" —Frances FitzGerald, author of The Evangelicals: The Struggle to Shape America

"Bloomsbury, Brook Farm, Montmartre—at various points in history, talented and highly motivated individuals with utopian ideals have congregated and sought to create a new world. In the middle decades of the 20th century a remarkable group of American writers, artists, actors, and political activists gathered in both Greenwich Village and the outer regions of Cape Cod. Drawing on personal knowledge and with exquisite detail, in The Shores of Bohemia, John Taylor Williams provides a definitive account of who did what, with (and against) whom, and with what effect. An informed, illuminating, and alluring read." —Howard Gardner, author of A Synthesizing Mind

"A fascinating, lively, and erudite account of an incredibly rich flowering of creativity on Cape Cod, told with grace and wit and a storyteller's panache." —Joseph Finder, author of House on Fire

"A cornucopia of characters whose lives in the first half of the 20th century made the outermost reaches of Cape Cod a site of exuberant artistic creativity and social and political experimentation. The bohemian world Ike Williams depicts will fascinate readers interested in the winds and tides of modern American culture as well as those of us who today walk the Cape’s beaches and swim in its waters." —Drew Gilpin Faust, author of This Republic of Suffering: Death and the American Civil War

“The political warriors, refuseniks, writers, artists, architects, intellectuals and lovers who gathered on Cape Cod’s distant crescent shores between WWI and the 1960s have rightly been honored as famous individuals. The great virtue of 'Ike' Williams’s The Shores of Bohemia is in linking them for the first time as an American community in revolt against their society, like no other. From John Reed and Emma Goldman to Mary McCarthy and Edward Hopper, Eero Saarinen and Norman Mailer they are all here, in a huge cast of extraordinary characters: drinking too much, talking too much, swimming too much, fishing too much, mating too much, but all contributing to the Atlantic Zeitgeist: a community of Bohemians, the loves and likes of which we will probably never see again in this country.” —Nigel Hamilton, author of War and Peace: FDR's Final Odyssey

"No more out-of-the-way place ever exerted such a powerful influence on American art, literature, politics, and intellectual life as outer Cape Cod in the mid–20th century. Williams shows with brisk authority how and why, but most absorbingly who. He can sketch a whole life in a sentence. The resulting portrait is like a Bruegel painting, thick with personalities and incident—with marriages, affairs, skinny-dipping parties, architectural movements, political arguments, addictions, recoveries, plays, spies, revolutions, elections, deaths, and rebirths." —Salvatore Scibona, author of The Volunteer