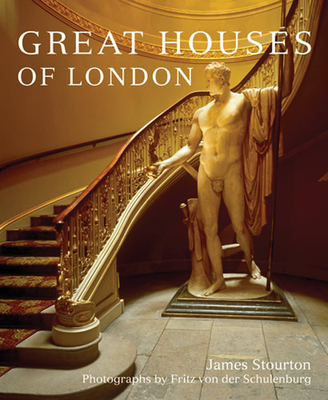 "This magnificent book, the fullest account ever written on its absorbing subject, will come as a revelation, even to those who think they know London, for many of the great town mansions featured in it, a good number of which are still in private occupation, are very little known and have never been illustrated before… a major contribution to British architectural and social history." - Professor David Watkin, Professor Emeritus, Department of History of Art, University of Cambridge

The great houses of London represent one of the marvels of English architecture and yet they are almost entirely unknown. They are for the most part disguised behind sober facades but their riches within are astonishing. From the romantic 17th century Ashburnham House, nestling in the shadow of Westminster Abbey, through the splendid 18th century aristocratic palaces of the West End, to the curious and quirky arts and crafts houses of Holland Park and Kensington, to the cool modernist houses of Hampstead and the exuberant post-modern interiors of the last thirty years, every house has its own story to tell.

JAMES STOURTON is Chairman of Sotheby's UK. He writes regularly for The Times, the Daily Telegraph, The Independent, The Spectator and Apollo. Previous books include Great Smaller Museums of Europe (2003) and Great Collectors of Our Time (2007).During a photographic career that has spanned over 35 years, FRITZ VON DER SCHULENBURG has achieved international acclaim. His photographs have been published in numerous interior design and architectural magazines, including The World of Interiors, House & Garden and Architectural Digest. He has also published several volumes of his own work. These include: Neoclassicism in the North, The English Garden Room, Romantic Scotland, Empire, and Living by Design.

'A treasure ... best of all are the authors personal asides on builders and those who inspired them'

'The true fascination resides in the less well-known interiors'

'This is a truly magnificent book. The wonderful text tells the story of the architects, owners and occupants, restoration, adaptation and change. And the photographs are exceptional.'

'The true fascination resides in the less well-known interiors'

'This magnificent book, with illustrations of breathtaking beauty specially taken by Fritz von der Schulenburg, is the fullest account ever written of its absorbing subject. It will come as a revelation, even to those who think they are familiar with London . . . The book is . . . not only about architecture, but about people, whose social, artistic and political ambitions, and manner of living, are vividly brought to life . . . We are familiar with the depressing list of great houses demolished in the 20th century, from Devonshire House to Londonderry House, but this book can surely cheer us up during the recession with its visions of surviving splendour.'

'This lavishly illustrated compendium suggest that the age of elegance endures'

'This sumptuously illustrated volume...extends its reach both sociologically and chronologically... James Stourton's text is very readable, deftly mingling the architectural history and the social, and on the whole reliable, and it is completemented by Fritz von der Schulenburg's specially taken photographs'

'Writing in a deceptively simple style, Stourton concentrates on architects and artists, on awners and occupants. Idiosyncratic and amusing, he makes you see everything in a new light'

'Stourton writes elegantly and absorbingly about both architects and owners'

'A treasure ... best of all are the authors personal asides on builders and those who inspired them'

'This is a truly magnificent book. The wonderful text tells the story of the architects, owners and occupants, restoration, adaptation and change. And the photographs are exceptional.'