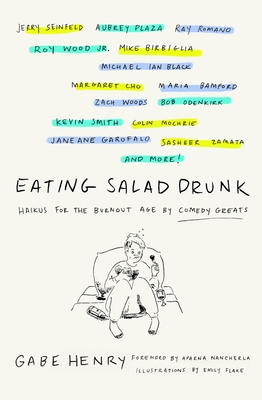 Eating Salad Drunk is the perfect gift for any fan of humor as an escape from our dystopian present.

*All author proceeds go towards Comedy Gives Back, a nonprofit that provides mental health, medical, and crisis support resources for comedians.

GABE HENRY is a New York-based writer, editor, and manager of the Brooklyn comedy venue Littlefield. He published his first book, What the Fact?! 365 Strange Days in History (Chronicle Books), in 2018.

EMILY FLAKE's cartoons and humorous essays run regularly in The New Yorker, The Nib, and many other publications. She's written and illustrated the books That Was Awkward, These Things Ain't Gonna Smoke Themselves, and Mama Tried. Her illustrations and cartoons appear in publications all over the world, including the New York Times, Newsweek, the Globe and Mail, The Onion, The New Statesman, and Forbes. She lives in Brooklyn, New York.

"A hilarious read that also honors the origin of the haiku. No, seriously. Read the introduction and you’ll see what I mean. Yeah, I know you don’t normally read introductions but you should make an exception here. Just do it. God for once in your life, Chris, just read an entire book cover to cover would it kill you to commit fully to one goddamn thing?" —Rachel Bloom, co-creator and star of the award-winning TV series Crazy Ex-Girlfriend

“I’d attempt to do this blurb in haiku form, but it would never measure up to the ones in this book."
—Ira Glass, host and creator of the popular NPR show This American Life

"What Gabe Henry has assembled here is a sparkling collection of bright jewels of wit and wisdom for you to pick up anytime and enjoy. I keep Eating Salad Drunk in my pocket." —Dick Cavett, legendary television personality, comedian, and talk show host

"The jokes herein are elegant and oddly beautiful as much as they are ridiculous." —Vulture