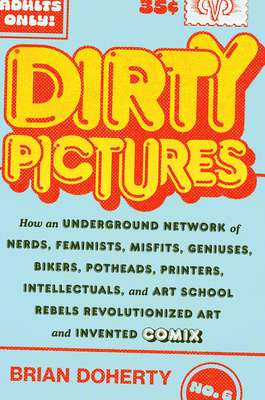 In the 1950s, comics meant POW! BAM! superheroes, family-friendly gags, and Sunday funnies, but in the 1960s, inspired by these strips and the satire of MAD magazine, a new generation of creators set out to subvert the medium, and with it, American culture.

Author Brian Doherty weaves together the stories of R. Crumb, Art Spiegelman, Trina Robbins, Spain Rodriguez, Harvey Pekar, and Howard Cruse, among many others, detailing the complete narrative history of this movement that came to define “cool.” Via dozens of new interviews and archival research, Doherty chronicles the scenes that sprang up around the country in the 1960s and ’70s and the rivalries, ideological battles, and conflicts that flourished. Beginning with the artists’ origin stories and following them through successes, including Spiegelman’s Pulitzer Prize winning Maus and the feminist collective Wimmen’s Comix, and through strife, from S. Clay Wilson’s spiral into alcoholism to Disney’s war on the Air Pirates comix collective to Crumb’s uneasy relationship with success as social mores turned against his often-shocking use of sexual and racial imagery, and concluding with an examination of these creators’ legacies, Dirty Pictures is the essential exploration of a truly American art form that recontextualized the way people thought about war, race, sex, gender, and expression.

Brian Doherty is a senior editor at Reason magazine and is the author of This Is Burning Man: The Rise of a New American Underground (Little, Brown, 2004). His reporting, essays, and reviews have appeared in the New York Times, the Wall Street Journal, the Washington Post, Mother Jones, and Fantagraphics's The Best American Comics Criticism, among others. He has also served as a judge for the comics industry’s Eisner Awards.

“Brian Doherty’s Dirty Pictures is coming out right when it’s needed. As creative expression is increasingly attacked from across the political spectrum, this wonderful book is a reminder of how art, unrestricted and free, helps us process the mess. It’s impeccably researched, sharply written, and opens a portal back to that old, weird America that found its mind by losing it a little.”
— Reid Mitenbuler, author of Wild Minds: The Artists and Rivalries That Inspired the Golden Age of Animation

“Tune in, read on, and know all. Brian Doherty's heroic and hilarious Dirty Pictures is a detail-rich history with insight from the giants—Robert Crumb through Art Spiegelman. The story of underground comix is not just important, it's as American as an apple pie laced with LSD.”
— Kliph Nesteroff, author of We Had a Little Real Estate Problem and The Comedians

"In order to develop the vast field of indie comics available today, where every style and subject under the sun is available to a reader, you need the foundation laid by the underground comix scene of the 60s and 70s. In Dirty Pictures, author Brian Doherty expertly details the players and events that led to an artistic renaissance."
— Ho Che Anderson, creator of King, Sand & Fury, and Godhead

“Dirty Pictures is a fascinating deep dig into a unique subculture populated by screwball eccentrics, whose rude, jarring, and far-out works of art changed the face of American humor in all its incarnations.”

— Gregg Turkington, comedian/actor (Entertainment, Ant-Man, On Cinema at the Cinema)

". . .given the exponential reach of this initially tiny cluster of transgressive artists, Doherty’s book is a welcome addition to an under-analyzed legacy of the free-spirited 1960s.”
— James Sullivan

"A free-wheeling, frank account of the rise and fall of the underground comic scene. . . . Lively, well researched, and full of telling anecdotes; just the thing for comix aficionados and collectors.”

"As Doherty entertainingly traces the movement’s rise—from its humble beginnings in the 1960s to its uphill battle to be recognized as an art form—he captures how it perfectly reflected the rapidly changing norms of the baby boomer generation and its enduring impact on pop culture today. Comix fans and artists should make room on their shelves for this one."
— Publishers Weekly

"...shines a light on a corner of the comics business that still hasn't received its due . . . If this topic interests you at all, Dirty Pictures is likely to be the most complete and authoritative account we’re going to get."
— Rob Salkowitz

"The book is simply the best and most comprehensive look at underground comics published to date."
— Alex Dueben

"An immense work of comics fandom and a labor of love ... the most far-reaching history of underground comix that anyone will ever likely write."