The Heroine with 1001 Faces (Hardcover) 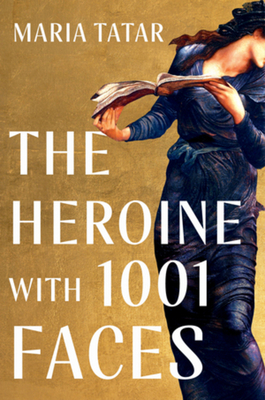 World-renowned folklorist Maria Tatar reveals an astonishing but long-buried history of heroines, taking us from Cassandra and Scheherazade to Nancy Drew and Wonder Woman.

The Heroine with 1,001 Faces dismantles the cult of warrior heroes, revealing a secret history of heroinism at the very heart of our collective cultural imagination. Maria Tatar, a leading authority on fairy tales and folklore, explores how heroines, rarely wielding a sword and often deprived of a pen, have flown beneath the radar even as they have been bent on redemptive missions. Deploying the domestic crafts and using words as weapons, they have found ways to survive assaults and rescue others from harm, all while repairing the fraying edges in the fabric of their social worlds. Like the tongueless Philomela, who spins the tale of her rape into a tapestry, or Arachne, who portrays the misdeeds of the gods, they have discovered instruments for securing fairness in the storytelling circles where so-called women’s work—spinning, mending, and weaving—is carried out.

Tatar challenges the canonical models of heroism in Joseph Campbell’s The Hero with a Thousand Faces, with their male-centric emphases on achieving glory and immortality. Finding the women missing from his account and defining their own heroic trajectories is no easy task, for Campbell created the playbook for Hollywood directors. Audiences around the world have willingly surrendered to the lure of quest narratives and charismatic heroes. Whether in the form of Frodo, Luke Skywalker, or Harry Potter, Campbell’s archetypical hero has dominated more than the box office.

In a broad-ranging volume that moves with ease from the local to the global, Tatar demonstrates how our new heroines wear their curiosity as a badge of honor rather than a mark of shame, and how their “mischief making” evidences compassion and concern. From Bluebeard’s wife to Nancy Drew, and from Jane Eyre to Janie Crawford, women have long crafted stories to broadcast offenses in the pursuit of social justice. Girls, too, have now precociously stepped up to the plate, with Hermione Granger, Katniss Everdeen, and Starr Carter as trickster figures enacting their own forms of extrajudicial justice. Their quests may not take the traditional form of a “hero’s journey,” but they reveal the value of courage, defiance, and, above all, care.

“By turns dazzling and chilling” (Ruth Franklin), The Heroine with 1,001 Faces creates a luminous arc that takes us from ancient times to the present day. It casts an unusually wide net, expanding the canon and thinking capaciously in global terms, breaking down the boundaries of genre, and displaying a sovereign command of cultural context. This, then, is a historic volume that informs our present and its newfound investment in empathy and social justice like no other work of recent cultural history.

Maria Tatar is the John L. Loeb Research Professor and a Senior Fellow at Harvard University. The editor of the Norton Critical Edition of The Classic Fairy Tales and The Annotated Brothers Grimm, she lives in Cambridge, Massachusetts.

She is stirring what J.R.R. Tolkien once called the 'cauldron of story' in search of the girls and women, some silenced and some forgotten, some from the Iliad and some from Netflix, who live in Campbell’s blind spot. The reader jumps from Arachne’s battle with Athena to the escape of Bluebeard’s trickster wife to Pippi Longstocking and Nancy Drew and even to Carrie Bradshaw typing away on her laptop.
— Gal Beckerman - New York Times Book Review

From Penelope and Pandora to Katniss Everdeen and Lisbeth Salander, the ‘hero's journey’ gets a much-needed makeover... Starting with Greek mythology and Scheherezade and moving through the centuries all the way to the Game of Thrones series and The Queen's Gambit, Tatar incisively explores women's reinvention of heroism to embrace empathy, compassion, and care, often to pursue social justice... The book really takes off when it gets to contemporary culture, particularly in a section that identifies a female version of the ‘trickster’ archetype in Everdeen and Salander. Of this lineage, among the shared interesting traits not traditionally associated with women characters is a prodigious appetite... As Wonder Woman might say, Suffering Sappho! This book is fascinating, fun, and consistently enlightening.

More than a rebuttal to Joseph Campbell’s seminal text The Hero with A Thousand Faces, Tatar’s book offers the infinite experiences of women.... Engaging with the works of Margaret Atwood, Angela Carter, Toni Morrison, Anne Sexton, and many others, Tatar explores the historical and textual difficulties of having a voice.... A necessary and compelling read for scholars, activists, and storytellers interested in inclusive revisions to the hero’s canon.

Rewarding.... Tatar defines a version of heroism that 'is driven... by attentive care, an affect that is triggered by openness to the world'... The overarching conversational tone and modern-day relevance give the book color [and] arguments are well supported with plenty of examples pulled from all corners of literature.
— Publishers Weekly