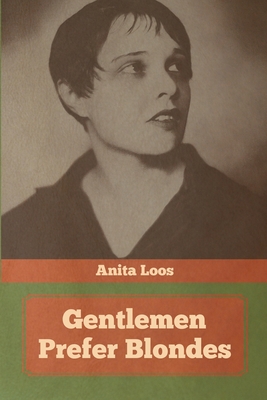 By Anita Loos
Email or call for price

Gentlemen Prefer Blondes: The Intimate Diary of a Professional Lady (1925) is a comic novel written by American author Anita Loos. The story primarily follows the escapades and dalliances of a young blonde flapper in New York City and Europe during the Roaring Twenties. It is one of several novels exploring the hedonistic Jazz Age published that year that have become famous-including F. Scott Fitzgerald's The Great Gatsby and Carl Van Vechten's Firecrackers.

Loos was inspired to write the novel by an incident aboard a train bound for Hollywood: "I was allowed to lug heavy suitcases from their racks while men sat about and failed to note my efforts," she recalled, and yet, when another young woman "happened to drop the novel she was reading, several men jumped to retrieve it." Loos surmised this difference in men's behavior was because she was a brunette and the other woman was a blonde. When drafting the novel, Loos drew upon memories of jealously observing "witless" blondes such as Ziegfeld Follies showgirls turn intellectual H.L. Mencken into a love-struck simpleton. Mencken, a close friend to whom Loos was sexually attracted, nonetheless enjoyed the satirical work and ensured its publication.

Originally published as a series of short sketches known as "the Lorelei stories" in Harper's Bazaar magazine, the work was published in book form by Boni & Liveright in 1925. Although dismissed by critics as "too light in texture to be very enduring," Loos' book was a runaway best seller, becoming the second-best selling title of 1926, and printed throughout the world in over thirteen different languages, including Chinese. By the time of Loos' death in 1981, the work had been printed in over 85 editions and had been adapted into a popular comic strip, a 1926 silent comedy, a 1949 Broadway musical, and a 1953 film adaptation of the latter musical. The book earned the praise of many writers including Edith Wharton who dubbed it "the great American novel."

Loos wrote a well-received sequel, But Gentlemen Marry Brunettes, in 1927. Several decades later, Loos was asked during a television interview in London whether she intended to write a third book. She facetiously replied that the title and theme of a third book would be Gentlemen Prefer Gentlemen. This remark resulted in the interview's abrupt termination. (wikipedia.org)