Textualism and Originalism in our Constitutional Republic (Paperback) 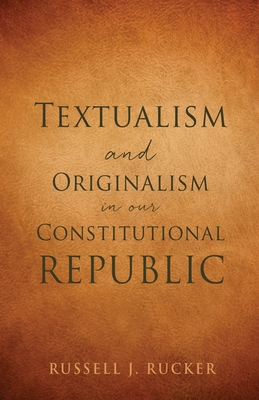 This is an argument for originalism and textualism. A constitutional theory that has taken root by a majority on the high court now. It is important to understand where we have been in order to know the republic we were promised by our founders. Herein is a paragraph-by-paragraph exclamation of the entire constitution, and our guaranteed rights. With the constitution in red it's easy to separate the language with the interpretation which I've written. My greatest hope is it will help you better understand the government we're supposed to have, as well as a little about our founders themselves. So many times, I find people who should be knowledgeable claim there are things in the constitution which are not even mentioned or grossly incorrect. I hope this corrects the record. This is a strict interpretation based only on the founders' vision as argued during the Constitutional convention, as well as debate at the time of the passage of each amendment. Mr. Rucker has served in elected positions of numerous organizations as well as in government. Has studied political theory and the constitution as well as our other founding documents. He has run for numerous offices over the last dozen years or so. In so doing has stood fast for our constitutional rights and worked for the preservation of liberty enshrined in our federal republic. He has ignored the call that nobody cares about the constitution and has forged ahead with its defense.