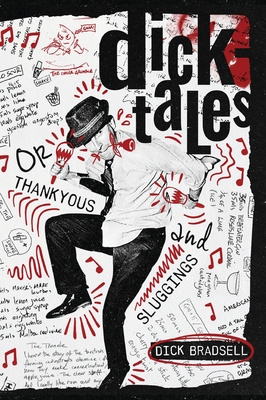 THIS IS THE LONG-AWAITED BOOK written by Mr. Dick Bradsell. AKA Soho Cocktail Legend, Father of the London Cocktail revival, The Bartenders' Bartender, Cocktail King, Creative Genius, are some of the titles attributed to him-though he would have introduced himself as Dick or perhaps Rosie Smudge or Cassandra the Wizard or Dungeon Master or.... This is not a cocktail book or a bar manual. Dick believed that others were better at writing those than him. Although incomplete and missing his final signature of approval, this book of thoughts, soundbites and (many) cocktails is part of his legacy.

Compiled and carefully reconstructed from his own writings, his words (and his opinions) from his incalculable notebooks, personal letters, and scraps of paper span almost four decades are reproduced in the raw so all the feeling and emotion of his thoughts are left in their finest unedited, unpolished form. Photos from private collections and his own artwork are sprinkled throughout as playful as they appeared in his notebooks. A tribute to his family and many friends who shaped his tread in life and supported him for better and for worse, in mind, spirit, and body. Ultimately, it is a celebration of the life and work of a proud British bartender, named Richard Arthur Bradsell.