How You Get Famous: Ten Years of Drag Madness in Brooklyn (Hardcover) 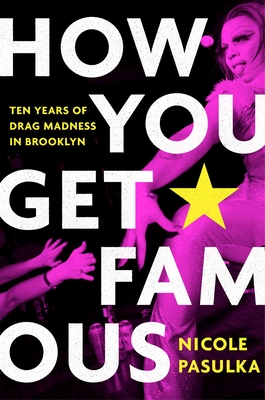 A madcap adventure through a tight-knit world of drag performers making art and mayhem in the greatest city on earth.

Ten years ago, an aimless coat check girl better known today as Merrie Cherry sweet-talked her boss into giving her $100 to host a drag show at a Brooklyn dive bar. Soon, kids like Aja were kicking their way into the scene, sneaking into clubs, pocketing their tips to help mom pay the mortgage, and sharing the stage with electric performers like Thorgy Thor and Sasha Velour. Because suddenly, in the biggest, brightest city in America, drag was offering young, broke, creative queer people a chance at real money—and for thousands or even millions of people to learn their names.

In How You Get Famous, journalist Nicole Pasulka joyfully documents the rebirth of the New York drag scene, following a group of iconoclastic performers with undeniable charisma, talent, and a hell of a lot to prove. The result is a sweeping portrait of the 21st-century search for celebrity and community, as well as a chronicle of all the struggles, fights, and disappointments along the way. A rollicking account of the quest to make a living through an art form on the cusp of becoming a cultural phenomenon, How You Get Famous offers an unmissable romp through the gritty and glamorous world of Brooklyn drag.

Nicole Pasulka writes about gender, activism, and criminal justice for publications such as New York magazine, Harper’s Magazine, Mother Jones, VICE, and The Believer. The recipient of numerous prestigious fellowships, her writing has been anthologized in the Best American series and featured on NPR’s All Things Considered. How You Get Famous is her first book.

“Takes us tumbling down a glittery rabbit hole.... [A] vivid portrait of a singular subculture: joyful and scrappy.”
—Esquire

“[O]riginal and compelling… stitched together with great respect and love.”
—The Guardian

“If you thought you knew everything there was to know about drag in New York, think again. How You Get Famous tackles Brooklyn’s rich and often labyrinthine history of drag with journalistic precision. Never afraid to embrace chaos and nuance, this is a book that’s both informative and, like so many of the divas it takes as its subjects, wildly entertaining.”
—John Paul Brammer, author of Hola Papi

“Can a queer subculture hit the big time without losing its edge? In this richly reported account, Pasulka takes readers on a riotous tour through a spiky demimonde on the verge of breaking through.”
—Sara Marcus, author of Girls to the Front

“Nicole Pasulka brings the underground world of Brooklyn drag to fabulous life, exploring the triumphs, heartaches, compromises, and catastrophes of trying to achieve fame in a fishbowl—all reality, no television.”
—Hugh Ryan, author of When Brooklyn Was Queer

“If you like to have a good time, you want to read this book!”
—Buzzfeed

“Spills the hot-mess tea—then reads the leaves to divine the myriad things drag has meant and could be.”
—Jeremy Atherton Lin, author of Gay Bar

“Every generation moves to New York City for fame, fortune, and love; this one did it in heels. Nicole Pasulka has written a shady and fabulous history of our time.”
—Choire Sicha, author of Very Recent History