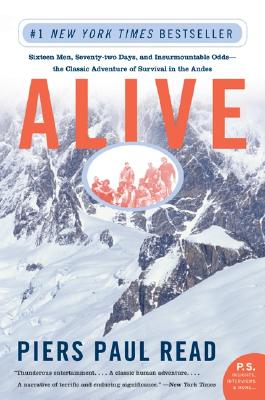 “No one will come away unmoved by the book, and no one will be able to put it down…. There is no way of reading Alive without a heightened sense of one’s own life and its value.” — New Republic

On October 12, 1972, an Uruguayan Air Force plane carrying a team of rugby players crashed in the remote snowy peaks of the Andes. Ten weeks later, only sixteen of the forty-five passengers were found alive. This is the story of those ten weeks spent in the shelter of the plane's fuselage without food and with scarcely any hope of a rescue. The survivors protected and helped one another, and came to the difficult conclusion that to live meant doing the unimaginable. Confronting nature at its most furious, two brave young men risked their lives to hike through the mountains looking for help. A tale of astonishing bravery and adventure, Alive is much more than a survival story, it is a breathtaking saga of human courage

The P.S. edition features an extra 16 pages of insights into the book, including interviews, recommended reading, and more.

Paul Piers Read is the author of numerous, critically acclaimed works of fiction and nonfiction, including A Patriot in Berlin (1996), Ablaze: The Story of the Heroes and Victims of Chernobyl (1993), On the Third Day (1989), and A Season in the West (1989). Mr. Read lives in London.

“A classic in the literature of survival.”
— Newsweek

“A great book . . . . an incredible saga. Read’s accomplishment in recording a struggle both physical and spiritual is superb.”
— Philadelphia Inquirer

“A chilling tale…. Will involve the reader as thoroughly as the best adventure novel. A book of real and lasting value.”
— Rolling Stone

“Superb…flawless…. A testimonial to the durability and determination of young men who might have chosen to die and simply would not.”
— Detroit Free Press

“A masterpiece...It is inconceivable to me that this story could have been better told.”
— Graham Greene

“No one will come away unmoved by the book, and no one will be able to put it down…. There is no way of reading Alive without a heightened sense of one’s own life and its value.”
— New Republic

“An adventure story to rival those of Hillary and Tensing, Thor Heyerdahl, or Jacques Cousteau.”
— Chicago Tribune

“An adventure both physical and spiritual...Mr. Read was chosen by the survivors to write a full and balanced account of their ordeal, and he has done so with conspicuous success.”
— The New Yorker