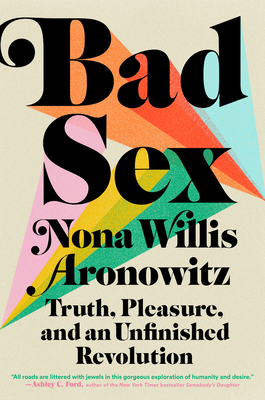 Named a Most Anticipated Book by Bustle, Esquire, Nylon, and The Millions

“Intimate, thoughtful, and accessible to anyone struggling with the persistent, maddening inequities of contemporary sex.” –Rebecca Traister, New York Times bestselling author of Good and Mad

From Teen Vogue sex and love columnist Nona Willis Aronowitz, a blend of memoir, social history, and cultural criticism that probes the meaning of desire and sexual freedom today.

At thirty-two years old, everything in Nona Willis Aronowitz’s life, and in America, was in disarray. Her marriage was falling apart. Her nuclear family was slipping away. Her heart and libido were both in overdrive. Embroiled in an era of fear, reckoning, and reimagining, her assumptions of what “sexual liberation” meant were suddenly up for debate.

In the thick of personal and political turmoil, Nona turned to the words of history’s sexual revolutionaries—including her late mother, early radical pro-sex feminist Ellen Willis. At a time when sex has never been more accepted and feminism has never been more mainstream, Nona asked herself: What, exactly, do I want? And are my sexual and romantic desires even possible amid the horrors and bribes of patriarchy, capitalism, and white supremacy?

Nona’s attempt to find the answer places her search for authentic intimacy alongside her family history and other stories stretching back nearly two hundred years. Stories of ambivalent wives and unchill sluts, free lovers and radical lesbians, sensitive men and woke misogynists, women who risk everything for sex—who buy sex, reject sex, have bad sex and good sex. The result is a brave, bold, and vulnerable exploration of what sexual freedom can mean. Bad Sex is Nona’s own journey to sexual satisfaction and romantic happiness, which not only lays bare the triumphs and flaws of contemporary feminism but also shines a light on universal questions of desire.

Nona Willis Aronowitz is the sex and love columnist for Teen Vogue. Her work has been published in The New York Times, The Cut, Elle, Vice, The Washington Post, and Playboy, among many others. She is the coauthor of Girldrive: Criss-Crossing America, Redefining Feminism. She is also the editor of an award-winning anthology of her mother Ellen Willis’s rock criticism, called Out of the Vinyl Deeps, as well as a comprehensive collection of Willis's work, The Essential Ellen Willis, which won the National Book Critics Circle Award for Criticism.

“Everything You Always Wanted to Know About 'Bad Sex’ but Were Afraid to Ask. . . . [this history is] critical, and fascinating, as a framework to interpret society’s views on love and sex in the present.”
—Jessica Bennett, New York Times

"When Nona Willis Aronowitz finally ends her marriage because of lackluster sex, she’s left with a question: Why, more than a half-century after the sexual revolution, are we still having bad sex, and what is standing in the way of our satisfaction? The daughter of prominent feminist Ellen Willis, Aronowitz is well situated for the messy work of understanding how cultural forces shape intimate desires. She deftly weaves her own story with her late mother’s writings. This spirited history paints feminism not as a fixed set of passed-down beliefs, but as an invitation to question the status quo.”
—NPR, “Books We Love”

"Cultural criticism, memoir, and social history collide in Aronowitz’s no-nonsense investigation of all that ails young lovers, like questions about desire, consent, and patriarchy. It’s a revealing read bound to expand your thinking."
—Esquire, The 20 Best Books of Summer 2022

“Within Bad Sex, Aronowitz introduces readers to fervent sluts and ambiguous wives, radical lesbians and liberationist lovers, all to discover how we reconcile ourselves and our desires in this time when both are under assault.”
—The Millions

“Part memoir, part history of pioneering feminist figures, Bad Sex is an attempt to make sense of feminism’s failure to, as the singer Self Esteem puts it, prioritize pleasure … Aronowitz is exceedingly well-read, and her book is stuffed with wisdom gleaned from her elders … These historical sections are unfailingly illuminating.”
—The Atlantic

“Part dishy sex diary, part feminist spark-notes, and part polemic for a sex-positive future, Bad Sex chronicles a series of Aronowitz’s sexual escapades after she ends her marriage ... Bad Sex is breezy and fast-paced … [Aronowitz’s] delight is an antidote to a nihilistically glum attitude that’s fashionable today. . . . Where else to start if not with the promise and potential of some better, freer, sexier future? It’s no ending, but perhaps a rigorous feminism can still begin where Aronowitz does: I want this.”
—Book Forum

"Part memoir, part history, and part cultural criticism, Willis-Aronowitz traces the lineage of sexual inequities from the nineteenth century to the present, pairing a historical deep-dive into misogyny, feminism, and consent, with the author’s own journey toward sexual and romantic liberation amid the backdrop of patriarchy, capitalism, and white supremacy."
—Electric Lit, "Favorite Nonfiction Books of 2022"

"Everybody's always talking about sex, but Nona Willis Aronowitz is truly saying something about it in Bad Sex. More than the act, this book touches on our conflicting narratives around pleasure, fear, hope, honesty, and at times, family. Aronowitz invites the reader into a conversation we may want to shy away from, but does so with so much enthusiasm and curiosity of her own we can't help but follow down another rabbit hole or into another memory. All roads are littered with jewels in this gorgeous exploration of humanity and desire."
—Ashley C. Ford, author of New York Times bestseller Somebody's Daughter

“Bad Sex is Nona Willis Aronowitz's deft exploration of the triumphs and the unfinished work of both feminism and the sexual revolution. Deeply informed by intellectual and familial history, Bad Sex is intimate, thoughtful, and accessible to anyone struggling with the persistent, maddening inequities of contemporary sex. Willis Aronowitz looks to the groundbreaking work of her mother for insight, yet has written a book that will surely inspire and enlighten the next generation of politically and sexually aroused feminist thinkers.”
—Rebecca Traister, author of New York Times bestseller Good and Mad

“…an exquisitely researched, joyfully conversational take on sexual oppression and sexual revolutions throughout history, as well as a deeply heartfelt memoir… This genuine and generousemotional offering is sure to make readers feel seen and heard, too.”
—Booklist (starred)

“An intelligent and disarmingly honest book about sex, love, marriage, radical feminism, the yearnings that echo across generations, and the true meaning of sexual liberation.”
—Amia Srinivasan, bestselling author of The Right to Sex

"As a writer, and editor and a chronicler of modern life, Nona Willis Aronowitz has charted a distinctive space for herself and her work. With her new book Bad Sex, she explored her own life and family history and delved into the past to create a comprehensive work about what sexual freedom can mean and the contradictions that complicate it."
—InsideHook

“A revealing personal and historical exploration of the disappointments, rewards, and ambivalence women experience when they explore sexual desires and relationships that challenge societal expectations about gender, race, class, and love. Well-researched, candid, and at times painfully perceptive.”
—Stephanie Coontz, author of A Strange Stirring: The Feminine Mystique and American Women at the Dawn of the 1960s

“With Bad Sex, Nona re-centers sexual agency in feminist history—and in her own life. This is not only a brilliant and evocative personal memoir, it also examines the critical goal of sexual liberation since long before the feminist second wave.”
—Susie Bright